I hope you guys are having a great day. I was driving from Las Vegas to California on my way to Frank Kern’s office and as I am hanging out with his inner circle group today, I sit here and one of the things I want to share with you guys is that it's super important - I mean this is the most important thing you're going to do this year…... it's called Claiming your Space.  As I was driving and stuck in traffic I turned on my Google doc and verbally, I came up with 100 different topics.  The number one topic though that they all relate to is you being able to claim your space, what does that mean?  That means you have something to say! You’ve got to get on Facebook, you’ve got to get out on social media and you have to say it, no one can do it for you, no one can be YOU!  And if no one can be you, then what is the problem?  You've got to get there and show up and then you've got to actually do it!  You know, just getting on Facebook live is great but what do you have to say?  What space are you claiming that no one else is occupying? And if someone else is occupying that space, then alpha up, push them out of the way, share something that is of value to the same audience, you are going have to work hard to grab that audience.  It's not impossible but I’ve got to be honest with you, most of you probably won't do it, you will not do it because at the end of the day it takes work.  People are not just going to show up and immediately want you to be their new guru, they already have a guru so you've got to convince them that you are a better guru.  You've got to convince them that you have something to say that's worth listening to, it's worth them giving you their time, it's that important! Most people are not going to do it, most people don't even know how to do it.  When I first became a hairdresser, I wanted to go out, wanted to have a big salon and a big following but you know what? Everybody was already getting a haircut, I wasn't their first haircut, I was not the first person that they saw or the first person for them to utilize or work with and you're not going to be the first person but you need to really alpha up and get out there, you need to want it so bad, you need to show up and then you say, “this is my space!”

When I showed up to that town, then I went beyond the town, I went through the county I had 2,000 salons there I was competing with.  2,000 within a half hour drive of my salon, that is a lot of competition and it's a lot of talk…. 96% of the people that I serviced for the first 3 years of our business were not from our area, that means that we were stealing people from other people's areas.  Now here's the thing, if you want to be the top of mind you have to be out there and you’ve got to claim your space! You’ve got to have something to say because if you're not willing to do it, someone else is. That's the key. Who's out there and who's willing to claim the space? If it's not you, it's going to be someone else….. DON’T LET THEM DO IT!!! You’ve got to go out there and if you want it you have to take it, this isn't playing for second best.  You’ve got to invest heavy of course.  I'm hanging out with Frank Kern and his inner circle, I paid to be here, it's not free and it's not just because I know Frank or because I've recommended Frank to Tony Robbins 15 years ago, this is because his information is valuable and I'm happy to pay for it just like all information-if it has value, pay for it!  If you're not willing to pay, who's going to pay you?  Think about that!!  You’ve got to go out there and be prepared to take advantage of your opportunity. Facebook, Youtube and Instagram are the playing fields for you, 12 years ago most people didn't take advantage of it except for Gary Vaynerchuk and everybody is like “Gary is an overnight success”, he's been doing this since 1994, he's no overnight success.  He's been crushing it, hustling and grinding it for 23 years. Grant Cardone has been doing it for 30 years, Tony Robbins has been doing it for 40 years…. that's why these guys are top because they all decided to alpha up,  they're not letting anybody jump into their space and they want more, they want to dominate!  They did not come here to be second best, I didn't get into what I do to be second best, there's no room with the best in the world in creating online digital courses and I want to create one for you!  I want you to jump into my seminars in April but you can't do that if you're not going after what you want.  If you're not clear as to what you want then it's not the right investment for you, but if you want to start sharing your information, it’s the perfect investment for you, so go out there and do something, find out more about what we're doing. Make it happen for you!

Love you guys, have a great day!

CEO and Founder of YOUWILLCHANGETHEWORLD.com, launching entrepreneurs with their own unique course to have a huge impact in the world. 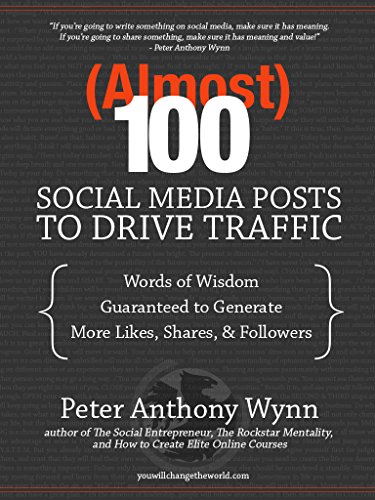 STOP CRYING: Yes I said it!

SO YOU WANTED TO GET IN THE RING OF ONLINE COURSES, the ring of business, the online world of digital millionaires who are sharing their passion and living their purpose. So you went out a . . .

WHY WOULD YOU LEAVE A MILLION Dollars on the table for someone else to have? PEOPLE DON'T KNOW WHO YOU ARE, WHO CARES!? So how will you sell a course and share your expertise?

Everyday people are getting involved with . . .

In Chapter Nine of my latest Book "Overcoming the Rockstar Mentality" I discuss the importance of defining your culture and the simple elements that cultures all must have in order to thrive. A strong business culture ne . . .

WHY HAVE YOUR SHARED!?

WHY HAVE YOUR SHARED:
Your 'why' is as important as your content. The reason that you feel compelled to help others find their voice and move forward on their journey. We cannot get there alone and creating a path for . . .

FROM EXPERT to EDUCATOR: Are People Connecting to YOU!?

FROM EXPERT to EDUCATOR:

Are people connecting to your message? One of the most important things that can happen when you are transitioning from EXPERT to EDUCATOR is that people are really understanding your message. T . . .

Become a Celebrity to Your Tribe

Truly you need to be a celebrity in order to create a great Online Course, a great online business that involves selling books, courses, and even speaking events.

Are You Ready To Change Your Life?

We recently got to connect with 120 of the really top top influencers from around the world, so, first of all, thank you Peter Halm, big shout out to you Andy Shaw, too. You guys rocked it, absolutely rocked it. So here' . . .

We share the importance of "mentoring" but what really does mentoring mean? Well it means "an experienced and trusted adviser". BUT consider this an online instructor is not a mentor, tough but in . . .

HOW IMPORTANT IS CLARITY

Frankly Clarity is everything! AS it applies to your online course and the marketing of that course it is absolutely in the TOP THREE THINGS you must have when creating an online course. Actually, it is among the top thr . . .

I wanted to talk today about something that I think is really important as we’re moving ourselves forward. There's three things that really make a difference in building your digital brand and there's some really importa . . .

Expand your BRAND by Sharing your “Wisdom & Passion”

People who are excited, passionate and determined should have the best tools available for their success. The best way to expand any brand is to manage what people LE . . .

EXCITEMENT:
If you are not excited about your own course then who will be? AS an online educator it is important to always be excited about what you are sharing, your excitement will excite others.

HOW DO YOU CHANGE THE WORLD?

"HOW DO YOU CHANGE THE WORLD?"
The Simple answer is obvious, start by changing yourself. I Would offer that there is another way to remove judgement and offer help. I believe "UNTIL WE ALL" choose to remove judgment we . . .

An Interesting Question, My UNIQUE answer

Someone asked me an interesting Question:

WHY WE NEED RAVING FANS:

WHY WE NEED RAVING FANS:
It perhaps seems obvious, raving fans of course we need them, But the truth is you NEED THEM. What I mean is that it is not 'NICE TO HAVE THEM' but you actually need them. These are not the fai . . .